One March evening a few years ago, I was in the Indianapolis airport restaurant. About to reach for my NCAA college basketball tournament predictions, I noticed at EVERY table businessmen and other travelers all working their brackets. This week, at a men's meeting at a Denver church, the leading conversation over dinner was, of course, brackets. "March Madness" is far beyond a TV promotion. The tournament has become a national pastime.

Now, finally, a perfect parlor sport for those not into college basketball, but feeling left out at all the bracketeering going on around you during this month... The Enlightened Bracketologist.

Slate Magazine's article on this new phenomenon (and a book, by the way) is a worthy entry into the contemporary obsession with ranking EVERYTHING. It's no longer good enough to merely argue opinions about great movies, books, actors, sports teams, boxers, tennis players, golfers, NASCAR drivers, country music stars, rock drummers, wonders of the world, frequent flier plans, fondue flavors... or anything else. Now you can put up all the leading candidates into a bracket, and watch them spar against each other to ultimate victory or defeat.

It's only a matter of time before university presidents, corporate bowl game boosters and other football gods finally succumb to a definitive national playoff tournament. You don't have to wait that long.

Personally, I enjoy the debate (over college football, movies, fondue) more than the "definitive" outcome. But, in the spirit of bracketology, I'm on board.

Play, and let me know how it goes. And for the record, "Casablanca" was the greatest movie of all time.
Posted by old school editor at 2:34 PM No comments: 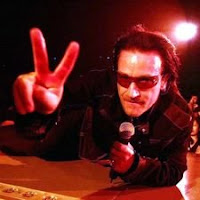 The 98-year old civil rights institution, the National Association for the Advancement of Colored People (NAACP), took a giant step forward at last night’s 38th Image Awards ceremony. Surprisingly, it was U2’s lead singer and activist Bono who may have set the agenda for the second hundred years of the venerable organization.

Bono was given the Chairman’s Award by NAACP Chairman Julian Bond and supermodel/TV host/media mogul Tyra Banks. Below, the transcript of Bono’s remarks, followed by links to related websites. Heed the call, y’all!

Wow, gee, Tyra Banks , you are gorgeous. I was a finalist in Ireland’s “Next Top Model.” I look up to you, literally. You’re beautiful.

(To Bond) You’re beautiful too. I, of course, am so truly humbled to share the stage with the great Julian Bond. Wow. Cool customer.

You know, when people talk about the greatness of America, I just think of the NAACP. That’s what I think of. It genuinely comes to my head. I’m also honored to be on the same stage as the other honorees, Soledad (O’Brien), Bill Cosby, Prince. Ahh. So cool. So cool.

See, I grew up in Ireland, and when I grew up, Ireland was divided along religious lines, sectarian lines. Young people like me were parched for the vision that poured out of pulpits of black America, and the vision of a black reverend from Atlanta, a man who refused to hate because he knew love would do a better job.

These ideas travel, you know, and they reach me clear as any tune, lodged in my brain like a song. I couldn’t shake that. This is Ireland in the 70s growing up. People like me looked across the ocean to the NAACP. And I’m here tonight and it feels good. It feels very, very good.

Well today, the world looks again to the NAACP. We need the community that taught the world about civil rights to teach us something about human rights. I’m talking about the right to live like a human, the right to live, period. Those are the stakes in Africa right now.

Five and a half thousand Africans dying every day of AIDS, a preventable, treatable disease. Nearly a million Africans, most of them children, dying every year from malaria. Death by mosquito bite. This is not about charity, as you know here in this room. This is about justice. It’s about justice and equality.

Now I know that America hasn’t solved all of its problems, and I know AIDS is still killing people right here in America. I know the hardest hit are African-Americans, many of them young women.

Today at a church in Oakland, I went to see such extraordinary people with this lioness here, Barbara Lee took me around with her pastor J. Alfred Smith. And may I say that it was the poetry and the righteous anger of the black church that was such an inspiration to me, a very white, almost pink Irish man growing up in Dublin.

Two million Americans have signed up to the ONE Campaign to make poverty history. Tonight the NAACP is signing up to work with us, and so can you. His truth is marching on, because where you live should not decide whether you live or whether you die.

And to those in the church who still sit in judgment on the AIDS emergency, let me climb into the pulpit for just one moment, because whatever thoughts we have about God, who He is, or even if God exists, most would agree that God has a special place for the poor. The poor are where God lives.

God is in the slums, in the cardboard boxes where the poor play house.
God is where the opportunity is lost and lives are shattered.
God is with the mother who has infected her child with a virus that will take both of their lives.
God is under the rubble in the cries we hear during wartime.
God, my friends, is with the poor, and God is with us if we are with them!

This is not a burden, this is an adventure. Don’t let anyone tell you it cannot be done. We can be the generation that ends extreme poverty.

The Roots did a hip-hop and rough but rock-worthy version of “Pride (in the name of love),” interjecting the chorus from Edwin Starr’s “War” (what is it good for, absolutely nothing). A couple more rehearsals would have helped, but high fives to rapper Black Thought and guitarist Capt. Kirk. Rock on!

Coverage of Bono’s trip to Oakland earlier in the day (San Francisco Chronicle)
"We're at the epicenter here in East Oakland of a new rise of the AIDS epidemic in the United States," said Bono. "But I'd also say we're also at the epicenter of the resistance to that epidemic."
Chris Tucker credits a trip to Africa with Bono for spurring him to get involved. His foundation's website is under construction.
Posted by old school editor at 8:27 AM 1 comment: