Confessions are down, I must confess 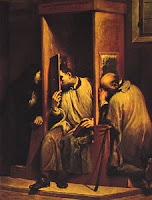 Confessions are down, and the Catholic Church is going to do something about it. The AP/Brietbart story says the Church will publish a guidebook on confession to boost the practice. Could a slick ad campaign be far behind? I hope so. I enjoy seeing religious, cause-related and spiritual messages compete for attention alongside all the “Buy me! Buy me!” hype.

MSN’s Slate Magazine on line tracked the same trend in Nov. 2005 in an article called “The Sin Box.”
Catholics are instructed to confess their serious sins to a priest at least once a year, and everyday faults (venial sins) may be confessed as needed, including violations of the 9th and 10th Commandments (“mere” lying and coveting respectively). I found the catechism (Part 2/Section 2/Chapter 2/Article 4/ VII - The Acts of the Penitent) on line at St. Charles Borromeo’s of Picayune, Miss.

Protestants and evangelicals don’t practice confession nearly as regularly, even though the Book of James (5:16) instructs followers of Christ to “confess your trespasses to one another.” I rediscovered the idea of confession as I studied accountability and its role in helping men practice Christianity.

The social networking websites, confessional blogs, and gossip media (TOO MUCH INFORMATION!) notwithstanding, America’s lax attitude toward confession is yet another indicator of soft Christianity that has little impact on followers or the onlooking general public.

What I tried to teach my children during discipline:
QUESTION NUMBER 1: Did you know the rule?
Unlike most country judges, ignorance of the law is an excuse. So it’s up to me to keep the rules (the letter of the law) and the heart attitude (spirit of the law) clear and understandable. As they get older and assume more responsibility (encounter more people, property, territory, experiences), they need a way to make decisions, a protocol for behavior, not just more and more rules. The over-reliance on rules rather than emphasizing pricipled behavior and sound judgment is killing our nation and making us the worst kind of fascist, nanny state.

(Here in Colorado, lawmakers just passed a “no texting while driving” law, due to a high profile traffic death of a child. Surely the State Patrol can write a strong enough ticket against “dangerous operation of a motor vehicle,” or “driving while distracted.” But I digress.)

In most cases, people know what they did wrong.

QUESTION NUMBER 2: Did you willfully break the rule?
Here’s where confession comes into play. The court of Dad looks very favorably upon a detailed, complete statement of willful wrongdoing. Such a confession will usually result in a punishment/penance of restoration/restitution, and a denial of privileges for a period of time to sufficiently remind the child of the root of their transgression.

Evasion, denial and outright lies will result in the most severe punishment, designed to inflict a stronger, more painful and enduring reminder. In dealing with an unrepentant sinner, it is also important to provide some way for the scofflaw to encounter the truth of the situation (the facts), the reality of his attitude (which drives bad behavior), and the path to redemption (hope, the second chance, a do-over, the nature of mercy).

That’s all. Just two questions are in play as we encounter our own sins (“missing the mark”).

Whether to a priest, pastor or peer, the regular practice of confession is not optional. I cross the line. God is offended and so are people. I must own it, put it on the table, make it right to the extent I can, receive forgiveness, and “go and sin no more.”
Posted by old school editor at 4:48 PM 1 comment: