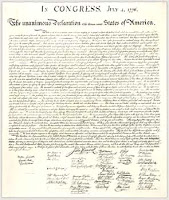 As a nation at war, and with troops conducting military operations around the world, this day of independence from tyranny begs the question, what for?

With voter participation in the last presidential election at about 61% (George Mason University), and all the Rock the Vote, Rap the Vote, Green the Vote efforts, one could ask, what for?

Tax Freedom Day came two days earlier this year over last (April 30, 2007). I looks like I’m working for the Man instead of myself for the first four months of the year. I often ask, what for?

THE DECLARATION OF INDEPENDENCE
Celebrating Thomas Jefferson’s “27 Complaints” (catchy title, ya think?) every Fourth of July is always fun. The grilling and ball games and street corner fireworks, even the big “fire in the sky” show downtown, should remind us of something, but what?

Tyranny. Two hundred thirty-one years ago, the conditions were brutal. It was bad enough for the gentried landowners, professionals and other politicians to risk it all on secession.

Jefferson was so right. We’re a laid-back folk. “All experience hath shewn, that mankind are more disposed to suffer, while evils are sufferable, than to right themselves by abolishing the forms to which they are accustomed.” Things must have been pretty bad, with no end in sight, for them to conclude that it was better to fight. In fact, when it comes to taking up arms, peaceable men will rely on the need to survive, or the calling of duty.

He restricted immigration (complaint #7) and used frontier battles with the Indians as a hedge against colonial expansion. Jefferson’s final complaint (#27) was against King George III’s league with “Indian Savages.” The monarch’s motivations on these counts seemed mostly economic, not primarily ethnic. (Is racism a more recent invention? Brutality is the arm of economic aggression across all cultures.)

For the full response to his tyranny, see the constitutional amendments. Today we celebrate that we are a nation of laws, not of monarchs. Not of men.

Are we willing to defend this American experiment as in the beginning: “with a firm reliance on the protection of divine Providence, we mutually pledge to each other our Lives, our Fortunes and our sacred Honor”?
Posted by old school editor at 11:55 AM No comments:

Email ThisBlogThis!Share to TwitterShare to FacebookShare to Pinterest
Labels: 4th of July, declaration of independence, tyranny 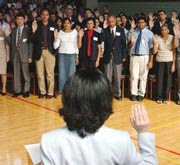 It’s a week of patriotic notions and nationalistic ideals (pretty tough on the globalists/internationalists who wish the whole border – flag thing would just go away).

The oath of citizenship puts the immigration debate into an interesting perspective. Those who deny the land of their birth overtly are rarely called “traitors.” Here in Destination Land, they are "naturalized citizen," or just "Americans." (Hyphenation anyone?) Their native country holds nothing for them, save family, friends and memories of upbringing. They forsook it all to become citizens of the United States of America.

Is it “fair” that those wishing to naturalize take a test to become citizens? Probably, but we should require the same knowledge of our own high school graduates. Take MSNBC's test here.

For all its faults, the old U.S. of A. is still drawing its share of migrants. It’s positive migration rate is estimated at 3.05 per thousand, ranking in the top 30 (higher if you do not include refugee migrations, the Middle East or the Caribbean. (CIA World Factbook)

Still, the U.S. is ensconced as a migrant nation, with nearly 12 percent of people in the U.S. listed as foreign-born. (Some might appreciate that Canada’s 2001 foreign-born rate is more than 18%)

Dallas preacher Tony Evans said, “we may have all come over on different ships, but we’re in the same boat now.” That’s pretty close to the truth.
Posted by old school editor at 11:42 PM No comments: