It must be stated loudly, clearly and plainly. We've got some serious work to do on ourselves, and for the most part, White America has nothing to say about it. For solutions, I veer toward family reformation, and more effective spiritual leadership. Too many dads not raising their sons and daughters. Too many churches not connecting the Bible and the Spirit to everyday living.

On the scale of things, the biggest problem facing black America is not the racism of whites (overt or subtle), or even the passive racism of the nation's institutions. Those issues still real, and must be handled separately, but I don't have time for another round of useless "hate crime legislation." Self-hatred is our biggest "hate" issue.

As an aside, this is one of the things that sets black conservatives at odds with liberals - the degree of responsibility one assigns to individuals, or in this case, the degree of blame one places on "others" (i.e. victim identity).

Thanks to Jason Whitlock for a piercing commentary on what is behind the violent deaths of black men like NFL player Sean Taylor. Your "agressive speculation" hits home. Keep the hard truth coming.

"... when shots are fired and a black man hits the pavement, there's every statistical reason to believe another black man pulled the trigger. That's not some negative, unfair stereotype. It's a reality we've been living with, tolerating and rationalizing for far too long."

The writers strike has me a little on edge. The next season of "24" will likely be delayed. Just in time, I ran across this bit o' video funnery on ifilm.com. It originates at collegehumor.com, and I'm sure to discover other guilty pleasures there.

So, in 1994 Jack Bauer's got long hair, and a pager. What a hoot! If the writers and producers don't come to terms soon, we may need a storyline and a few more episodes from these guys.

Posted by old school editor at 5:47 PM No comments:

When a patriarch dies

The following was written for my uncle's funeral last week. He was the last patriarch in my father's line. His passing means the new patriarchs come from my generation. Yikes!! Somebody's getting old.

“The king is dead. Long live the king.”

England and other monarchies have their succession plans laid out well into the future. They are never without a leader. As soon as the monarch dies, another is in place. The kingdom is never without a king.

Enemies lurk about, waiting for a weakness in leadership, looking for a gap in the wall, ready to take advantage of a sleeping sentry. Today, we give our enemy no opportunity for attack. We are ready to take our place in the line of succession.

As we look around, there are just a few artifacts of such a rich and full life:
A short wave radio,
A Count Basie record,
A sky blue Buick Deluxe,
A thousand books or so,
A painting or a sculpture,
These things hold just a whiff of a man’s impact.

The real souvenirs come in the form of legacy… memories… the things he always said, over and over, as if we would forget them.

His legacy is in his actions:
The jobs he took when no one else was there to do the job,
The tough choices he made when others just looked on like the problem would fix itself,
The words he spoke when others were silent.

We feel his legacy when we remember his touch. We are imprinted by his style. Funny how some things pass so naturally from generation to generation.

Are we more than a picture on a wall? When a child asks, “who is that,” what will we say? Let us be known not just by the deeds on our resume. Let us be known by the things we care about. Let us be remembered by our passion.

Yes, tell the stories, and remember what you hear today. Tell the stories to others, and write them down if you can. The details get kind of sketchy over time. Take pictures today. Put time into building the slide show. Those who are bored by the stories of past trials and triumphs just don’t get it. We’re smarter and richer when we learn from our mothers and fathers.

We are in a generational battle. We are trying to build our place in this land, and our challenge is to take our parents’ fight to the next level.

We take our place, standing on shoulders of the elders. Standing up here, we can see out beyond the horizon.

I bid welcome to the new patriarchs and new matriarchs. Do you feel ready? It doesn’t matter. Jesus asked the Father, “take this cup from me. Nevertheless, not my will, but thine be done.”

We stand because we must. Today, leadership is thrust upon us. And the younger ones look to us, to see how far they can go. Almighty God, help us be wise. Give us strength for the simple and profound task of being a role model.

All wars are popular for the first thirty days.
Arthur Schlesinger, Jr.

It is well that war is so terrible; else we would grow too fond of it.
Robert E. Lee, at the battle of Fredericksburg, 1862
Here’s one for the grunts, jarheads and glory hounds, the fly boys and swabbies, SEALs and Green Berets and Rangers and all the others who serve under the Department of Defense.

The founding fellows had just finished a long war of independence (1783), so it appears their priority at the beginning was forming a more perfect Union. The U.S. Constitution doesn’t get to the war stuff until Article 1 (Legislative branch), section 8.

Taking a clue from the preamble of the Constitution, the whole point of military service is ultimately and finally at its core the preservation of the Union, as expressed in the Constitution.

It’s all about the Constitution. It’s in the President’s oath, and every civil servant’s oath. It’s in the military oath. We ask our military to commit entirely to support and defend the Constitution of the United States. Not the borders, not the people, not friends and relatives, nor petroleum supplies, nor baseball, nor Hollywood, nor the burger shack, nor our beefy and elegant automobiles, nor any of the romantic things we cherish as most American and most worth defending.

It’s about defending the ideal, even where yet unattained, of the Constitution.

The parades, the fly-bys, the salutes, the Uniform Code of Military Justice, the uniforms, the rank, the obstacle courses, the light weapons, the heavy artillery, the planes, boats, and humvees, the nukes…, the GI Bill, the VA home loan, the commissary and PX, the flags at the cemetery, all of it is for one single, solitary purpose: to support and defend the Constitution against all enemies, foreign and domestic.

So I salute you. Thanks. It’s a big idea, and a grand notion, and as a nation, we’re not there yet. But it’s worth it, and I’m glad you stepped up.

Link to the Constitution. Read it! Use it or lose it!

Link to a few quotes on war from Encarta
Posted by old school editor at 10:25 PM 1 comment:

In the last few days, Wall Street is rocking as its leaders tumble. Last week the nation's largest brokerage house Merrill Lynch saw its CEO Stanley O'Neal step down. This week, it's the nation's largest bank, Citigroup's Charles Prince III resigning.
I do not want to talk about their golden parachutes. (They leave with millions, having lost billions for their companies.)
I just wanted to mention that when O'Neal said his goodbyes, at least one reporter mentioned that he was Merrill Lynch's first black CEO. There was no mention that Charles Prince was another in a long line of white guys at the helm of Citigroup. Do we get it yet?
True equality is when a black guy can get fired for incompetence just like a white guy, and still get a sweet severance package... and then get hired by another financial firm after a short vacation (like the small club of re-treaded coaches in the NFL, or Don Imus).
I think as a country, we're almost there. Not quite, but almost.
Posted by old school editor at 2:06 PM 1 comment:

Some U.S. State Department officers don’t want to go to Iraq to help do some nation-building? No surprise there, I guess, but it comes with the territory, doesn’t it? I think we’ve got an “all volunteer” State Department, right?

Secretary of State Condoleeza Rice reminded her diplomats of their oath:
"I do solemnly swear that I will support and defend the Constitution of the United States against all enemies, foreign and domestic, that I will bear true faith and allegiance to the same, that I take this obligation freely, without any mental reservation or purpose of evasion, and I will well and faithfully discharge the duties of the office on which I am about to enter. So help me God."

How can we ask less of State than we do of Defense? (We civilians don’t realize how much we need those career diplomats until we’re in a foreign country and “need” something from the embassy.)

Occasionally we hear discussion about what citizens can do while the military is taking heavy fire routing Al-Qaeda from Afghanistan, and trying to fix the mess that is Iraq. I would expect that more departments will be called into service overseas: Agriculture, Commerce, Housing.

How can we ask less of ourselves than we do of our “government?”

Posted by old school editor at 5:38 AM No comments: 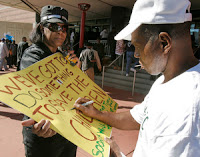 In October, the city's police commissioner Sylvester Johnson called for help with his city's crime epidemic. 10,000 men could help with that - 10,000 men who were committed, trained and organized for the task.

The critics are so predictable. "Vigilantism!" "It's naive." And always, "Who's going to pay for it?"

But there's a powerful tonic at work when society demands something positive from its men. The quotes from the Oct. 21st rally were stirring.

Temple professor Molefi Kete Asante said of the scale of violence in the African-American community:
"Ours is not just a crisis of homicide, this is a crisis of suicide."
He concluded by exhorting the crowd, "Up, up, you mighty men. We can accomplish what we must!"
(Phila. Daily News, Oct. 22, 2007)

I'm a sucker for that kind of rhetoric. The alternatives, mindless rap, petty and dispassionate complaints, and silence, do nothing for me at all.

One editorial at Philly.com called for "10,000 jobs, not 10,000 men." They don't get that society suffers when men check out, or are cut out of the community picture. I say we call for each and every man who is a father to step up and engage with their children. I'd call it "10,000 dads." Regardless, these guys are part of the solution.

Link to the ongoing 10,000 men campaign in Philadelphia.
Posted by old school editor at 8:15 PM No comments: