This I believe - fatherhood is calling! 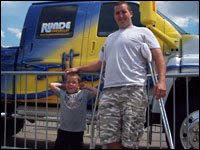 I heard a guy talk about how fatherhood changed his approach to life. I get that.

Daniel Flanagan's testimonial appeared recently on NPR's regular feature "This I Believe."
"...now I believe in do-overs, in the chance to do it all again. And I believe that do-overs can be made at any point in your life, if you have the right motivation. Mine came from a surprising source. It was September 21, 2002, when my son Blake was born."
From self-described "loser" to husband, father, and college student. You da man.
It's up to us all to "be the man."
Posted by old school editor at 12:40 PM 2 comments:

A “cure” for what ails us

(photo by www.redhaze.co.uk)
Every time my resolve weakens, every time I falter in my responsibilities, every time I’m tempted to take the easy way out, I catch a strong whiff of Star Parker.

She describes her journey as “from welfare fraud to conservative crusader.” She attributes her turnaround to her Christian conversion, but I don’t think Jesus made her a conservative. Jesus gives life. Jesus gives truth. How we apply that new reality depends on how well we listen to and obey the Holy Spirit. Parker’s genuine compassion and vision for empowerment have become a mission.

Plug into Star Parker’s Coalition for Urban Renewal and Education (C.U.R.E., get it?). You’ll appreciate her voice of reason in this age of false compassion and political doublespeak.

I lost my scout!

(photo by R. DelVecchio, US Army)
Mike was my scout, my front guard. I met him six years ago at a conference in Denver, and we just connected. We stayed in touch. I called him to make sure he was still making spiritual progress. He would call me with profound and timely spiritual advice. Mike always called at the perfect time, totally unsolicited. “Scout” is one of six important guys you should have in your life. See “Resource” note at bottom of this post.

Mike was a reluctant prophet. Like many who struggle with this most sensitive spiritual gift, Mike was never at ease with the responsibility of hearing exactly what Almighty God is saying, and then passing that information along. His gift never went to his head.

Over these few years, Mike had an impact on my life. He encouraged me to continue carrying my nine-foot wheeled cross across cities around the U.S., and to carry the burdens of the nation in Christ’s name.

On 3/17/03, Mike said, “Hold steady and depend on the Lord, Be shed of the anchors that hold you down, be ready to move freely. Let us be faithful with our income, tithes and offerings.”

And just three days before he left us on 7/9/08, Mike called with this gem, “Don't talk so much. Be quiet and listen. Let the Lord get a word in edgewise.”

Hey Mike, who asked you? Who made you prophet over my life? Do I need this kind of rebuke? What kind of friend are you? Mike was the most special kind of friend – a friend who speaks the truth in love. There is no more valuable friend than one who is willing to tell you - straight up - the way things are.

To all you who wrestle with God over your gift, please obey the Lord and speak what God gives you. Sure we stone our prophets, but without your obedience, we will perish. Without you, our cause of death will be written down as “ignorance and stupidity.”

Right now, I’ve got a major opening in my “circle.” Thanks, Lord, for sending Mike to serve so well.

You will be missed, but we'll see you soon, bro!

Resource:
See “Six Vital Relationships No Man Should Do Without” from Encourage Men to Pray Ministries.
Posted by old school editor at 5:39 PM 2 comments:

(photo by David J. Nightingale)
Happy 232nd birthday USA! We went through all our little fireworks last evening, those weak, tiny little Colorado approved fireworks, while all around us the serious skyshow was under way. I guess they all went to Wyoming. Later we listened to the neighbors party late into the night. Then we listened to them fight - the real fireworks.
A year ago at this time, I posted a piece called "Jefferson's 27 complaints." I hope you enjoy it.
(Pop culture tie-in: the Hollywood release for this week is "Hancock" (Will Smith as alcoholic super hero). Hancock - you know, like the prominent signer of the Declaration of Independence. Eerie!)
Posted by old school editor at 11:28 AM No comments:

Email ThisBlogThis!Share to TwitterShare to FacebookShare to Pinterest
Labels: declaration of independence, Jefferson

(photo by Molly Burgess, U.S. Navy)
Denver is ablaze over jazz singer Rene Marie’s switcheroo of the national anthem preceding Mayor John Hickenlooper’s “State of the City” 2008 address. Instead of “The Star Spangled Banner,” she arranged the lyrics from “Lift Every Voice and Sing” to the tune of the traditional national anthem. (Lyrics here)

Much of the debate locally is around the use of what is called “the black national anthem” in place of the official version. “Lift Every Voice and Sing” is a beautiful and sacred song. I’ve taught my children to stand when it’s played (but I don’t think they know the first verse). And for the record, in my National Baptist Hymnal, it’s #477 and listed as “National Negro Hymn.”

But they also know the purpose and the decorum around the national anthem. You stand. You put your hand on your heart. You take your hat off. (Even in another country, the least you would do is stand in respect to your hosts.)

But at this public event, oh, the outrage! And for good reason. Ms. Marie’s artistic interpretation was an indulgence, poorly placed during a official city event, and she abused the privilege. She insulted the unifying national sentiment (the purpose of the national anthem). She embarrassed the Democratic mayor on the eve of the Democratic National Convention. In my book, she also insulted “Lift Every Voice and Sing” by blending it with the Francis Scott Key anthem. But hey, that’s art for ya.

The blame is flying around, but there is one unnamed member of the mayor’s staff that is shaking in his or her boots this morning. They should have known what they were getting. Rene Marie is a self-proclaimed activist. From an interview at JazzReview.com she describes herself as “devil’s advocate and sometimes a rabble-rouser. I bring up things that I’m passionate about. I’m a renegade.”

In her creative flow, she once blended the words from Billie Holiday’s lament to southern lynchings “Strange Fruit” with the tune of “Dixie.” That's creative! Colorado’s Governor Ritter says she performed the exact same rendition of “Lift Every Voice” to the anthem’s tune at the Colorado Prayer Luncheon to a standing ovation… but I doubt it was billed as the national anthem. Expectations are everything.

I would like to see her in concert or at a jazz club. I might be entertained, but not when I’m ready to sing the national anthem. She is all set in far left circles, but she won’t be invited to any more official sing-alongs.

I think that somebody in the Mayor’s office is pretty lax about official decorum. Patriotism is about more than gestures, but symbols matter, especially in the media age.

Now, to other famous renditions of the national anthem, and you vote, good or bad:
Jimi Hendrix’s guitar instrumental at Woodstock (1969)
Marvin Gaye’s blending of “The Star Spangled Banner” (1983) (NPR story)
Roseanne Barr’s screech at the Padres - Reds game (1990) (YouTube)
Whitney Houston at Super Bowl XXV (1991) (YouTube)
And if they are not billed as the anthem, are we OK with Ray Charles unforgettable “America, the Beautiful” and Kate Smith’s “God Bless America” (1938). Who’s writing the new hymns?
Posted by old school editor at 11:13 AM 5 comments: