Stay Married - so help you God 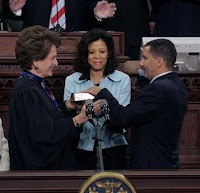 (photo by Mike Groll/Yahoo News/AP)
The New York Governor is keeping the mainstream media (and the tabloids) busy these days. The new Guv, David Paterson, who took office after Eliot Spitzer's quick disgrace and resignation, has himself announced adultery... a few times, with different women. His wife has also revealed her adultery.
It all happened during a rough spot in their marriage a few years ago. They announced it, wisely, at the beginning of his tenure in the Big Chair. "I didn't want to be compromised. My conscience is clear. I feel a lot better," the Guv said on day two of his administration. They are in counseling and have vowed not to do it again.
Now his staff and reporters are making sure he didn't use state money for his trysts. "We the people" seem to care much more about how our tax dollars are at work, than about how our politicians are workin' it.
(A couple of scalawags not mentioned or pictured in the previous post, no less than the 1990s posterboys for dalliance, President William Clinton and Speaker of the House Newt Gingrich. The President holding his marriage together, Mr. Speaker divorcing his second wife and marrying the girlfriend with whom he affaired.)
America seems to be settling for a bit less personal perfection in the character of her leaders, and the press is ready to make sure we know from where all the dirt under those fingernails came.
Marriage ain't easy, and it ain't supposed to be. But it is worth fighting for. Couples are supposed to fight together, against the things that try to tear them apart. Too often we just settle for the easy opponent - our spouse. Thanks to Family Life Ministries of Little Rock Arkansas (http://www.familylife.com/), who taught my wife and I that "your spouse is not your enemy."
I'm praying for the Patersons. It's easier for most of us. We don't have to do a news conference to confess all our junk. Do you think the pressure of the public spotlight would keep us on the straight and narrow way?
Posted by old school editor at 11:32 AM No comments:

He fell like lightning. But New York’s shamed Gov. Eliot Spitzer is not the devil incarnate. He’s merely a man, beset by the guilt he bore privately until Monday. His guilt was safely shielded behind his bravado, or so he thought.

Spitzer crashed hard and fast, behind implications that he hired an escort to travel from New York to Washington for a couple of hours of sexual favors. The feds were alerted because of unusual transactions, a shell company, and a phony name, all allegedly used by the Guv to pay for his partying ways. He resigned

because he has no time to run the State of New York. His job yesterday was to wrangle some kind of legal deal to keep him out of federal court. His job today is to wrestle his demons and try, try to restore some semblance of a relationship with his wife and daughters. That job will take him longer than he thinks.

Spitzer joins the legion of wealthy, powerful, successful men who were compelled to cross the line both personally and professionally. We build ‘em up

– politicians, athletes, preachers – and we watch ‘em slide down the steps they built, bruising their rumps and heads all they way. Painful. To some, it’s morbidly delightful.

The details of this case are so juicy. If it were a Hollywood script, it would be dismissed as unbelievable. Golly, politics is fun!

ON PROSTITUTION
If the Guv got his freak on way out there in Nevada, where such things are

legal and regulated, (and if he paid for it in cash from his own money) would he be in trouble? Not so much.

Unfortunately, the sexually liberated and libertarian-wanna be American public doesn’t care nearly as much about marriage vows as it does about public money. Should we care?

People say they don’t care what a man does in his private life. But deep down, we know if a man lies to his wife and kids, he will lie to us. And trust don’t come cheap. It takes years to prove oneself faithful. And in a moment, that tree can be cut down.

OFFICER OF THE COURT
If proven guilty, extra demerits for an attorney who crosses the line. Triple demerits for the prosecuting attorney caught working loopholes in the system. For a zealot like Spitzer who defended the letter of the law with such glee, no mercy. He should expect the prosecutor to give no quarter. But those guys don’t play by the same rules as you and me.

THE NEW GOVERNOR
David Paterson will become New York’s governor next Monday. The Honorable Mr. Paterson represented Harlem in the N.Y. state legislature for 20 years before becoming Lieutenant Governor in 2006. He also spoke (not during prime time) at the 2004 Democratic convention in Boston, where Barack Obama stormed onto the national stage. I’ve already heard newscasters report that Paterson would be NY’s first African-American governor. It’s a bigger story that he will be the first blind governor in the nation’s history.

WHY THEY DO IT
Lust? Power? "Because they can?" An old preacher once said, "every man who knocks on the door of a prostitute is actually looking for God." Like most substitutes, whatever a guy is looking for, it's rarely - if ever - found at the door of a harlot. True intimacy, deep and true fulfillment, great sex, real interest and deep caring is more likely found at home than "on the road."

If not, well, there's nothing sadder than a "lonely husband."
Posted by old school editor at 11:43 PM No comments: