Don't miss the probing and future-oriented cover story from Christianity Today's October 2006 issue, which included a paragraph on ministry to men (they noticed!). The entire article is valuable, so I hope you'll follow the link and ponder where the U.S. evangelical Church is headed. Here's the graph:

Christianity Today, "What's Next? 114 leaders on evangelical priorities for the next 50 years"
http://www.christianitytoday.com/ct/2006/october/18.72.html
Posted by old school editor at 11:27 AM 10 comments:

Thanks for setting such a high bar, Mr. Bradley. Now, over to you, Deborah Mathis for your salute, posted on BlackAmericaWeb.com, "Remembering the Old School Cool of Ed Bradley."
http://www.blackamericaweb.com/site.aspx/sayitloud/mathis1113
Also, see the very nice page of journalism remembrance on the CBS News memorial page, including Wynton Marsalis video!
http://www.cbsnews.com/sections/60minutes/main3415.shtml
Posted by old school editor at 2:01 PM No comments:

Ministers and scientists in the same room?!

The hallway outside the banquet room was bustling as 200 ministers checked in for their “free breakfast,” sponsored by a local Christian radio station. It was part of October’s “Clergy Appreciation Month.” If you only knew what our beleaguered ministers have to go through for the privilege of “shepherding the flock.” One free breakfast (and a bag of freebies) is a step in the right direction.

In the adjoining meeting room was the “Scientific Society for the Study of the Origin of the Universe” (or something like that). Cool! What if somebody (mischievous me) switched the placards halfway through the reception period. We could end up with a room half full of ministers who profess to know the creator of the universe, and half full of scientists who are working up theories and details on exactly how the whole inter-galactic stew got cooked up.

The scientific and the spiritual. The physical and the metaphysical. Faith and works. Are they really that far apart? Now that would be some interesting table conversation.
Posted by old school editor at 3:20 AM No comments:

A shot from early in the Iraq war 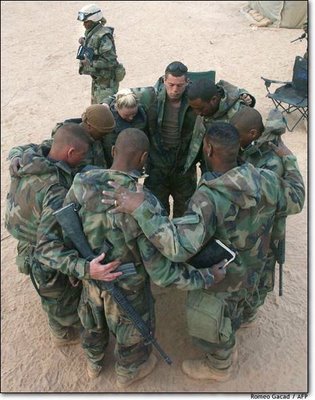 Remember the troops in your prayers daily. Let's pray them home (in addition to all our other agitations)!
Posted by old school editor at 1:26 AM No comments:

The Old School Blog (subtitled "Chivalry, Courage, Fear, Faith, and other random thoughts on men and manhood in news and culture") is a gathering spot for ideas about what makes a man. As you may infer from the name of the blog, I’m leaning toward a simpler time, when men were men and didn’t need to get in touch with their feelings. Men felt and they acted. Now enlightened, men ponder and opine, but too often hesitate and remain silent.

The world is dying for men who would speak and act from their best self, their true self. “Red bandana” men (you’ll read about them later, if you haven’t already received the 9/11 e-mail). Titanic men and boys (you’ll hear about them later – throwbacks to the days of chivalry). Mad dads. Valiant sons. Wise mentors and grand-dads.

Here’s to the “old school” brothers, and the women and society dying for them to remember themselves and start acting like it.
Posted by old school editor at 12:27 AM 1 comment: