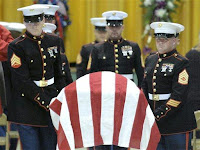 A civilian saw a soldier at the airport. Filled with gratitude, the civvy asked, “What can I do for you?” The soldier replied, “just enjoy your freedom.”

If one thinks too long about it, the weight of grief on a day like today can be overwhelming. Too many wars, too many families, too many empty chairs around the table.

From the President at Arlington Memorial Cemetery this Memorial Day:

What is thing, this sense of duty? What tugs at a person until he or she says "Send me"? Why, in an age when so many have acted only in pursuit of the narrowest self-interest, have the soldiers, sailors, airmen and Marines of this generation volunteered all that they have on behalf of others? Why have they been willing to bear the heaviest burden?

Wisely, our poet-President declined to answer those ultimate questions. They are too lofty for us. More from President Obama...

Whatever it is, they felt some tug; they answered a call; they said "I'll go." That is why they are the best of America, and that is what separates them from those of us who have not served in uniform -- their extraordinary willingness to risk their lives for people they never met.

Wisely, he acknowledged that we are not all the same. We are different - those who accept the call and those who do not.

The text of the President’s speech here.

It is important to honor the fallen by remembering them and their sacrifice. For this citizen, the freedom they defend is more than some misty, sentimental ideal. The freedom I enjoy is manifest daily in freedom of speech and faith, movement, self-defense, due process, and opportunity. You know, the Constitution. Still worth fighting for.
Posted by old school editor at 9:38 PM No comments: