"A man who isolates himself seeks his own desire; he rages against all wise judgment." Proverbs 18, verse 1

Lonely men are capable of doing great harm. Will you be "dangerous" for good or dangerous for evil?

URGENT!! You must have other men in your life, for friendship, for accountability, for stress relief, for sharpening, for safety, for laughter, for cover.

Pray. Ask God for a few good men. Own the fact that you will be half a man, or a bad man, without a couple of brothers around you.

It's a matter of life and death.

As the details of the Virginia Tech assasin are uncovered, you will be shocked to read about the troubled life of the Austin shooter from 40 years ago. LINK: Court TV's profile of 1966 Univ. of Texas sniper Charles Whitman

Posted by old school editor at 6:09 PM No comments: 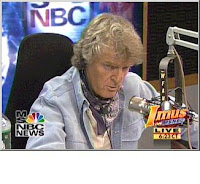 Before we get into the nap of talk show host Don Imus’ hair (kind of curly, don’t you think?), let’s try to get some perspective on ethnic and gender humor.

His “joke” about the Rutgers women’s basketball team being “nappy-headed ‘hos” aside, Don Imus is not the biggest problem on the landscape when it comes to misogynistic, bigoted “hate speech.” The most dangerous voices of racism and sexism in the U.S. today are coming not from whites, but from within the black community, especially musicians.

Imus’ chief error was to forget that one can say anything one wants about one’s own kind (whatever the “kind”), but an outsider has no such license. It is ultimately defeating in the struggle against bigotry that pop culture’s widespread use of the words “nigger,” “ho,” “bitch” and worse seduced Imus into thinking he can say anything on the air without consequence.

I realize that any campaign to roll back the crude attitude of today’s pop music stands about the same chances as Britney and Justin getting back together as Mouseketeers. It just won’t happen. But someone somewhere must begin to deal with the impact of this negative self-image in the young African-American vernacular. Lest we be consigned to another generation of fatherless kids, diploma-less students, and cash-less communities.

Altruistically, CBS CEO Leslie Moonves said he felt the heat from co-workers in the hallways. His concern: “the effect language like this has on our young people, particularly young women of color trying to make their way in this society.” Sounds honorable. Will Moonves apply this standard to other CBS enterprises (CBS and The CW television networks, cable’s Showtime and CSTV, local CBS television stations, CBS Paramount Network Television and CBS Television Distribution Group, CBS Outdoor, Simon & Schuster, CBS Interactive, and CBS Consumer Products)? Is America’s corporate media ready to take its responsibility for the shadow it casts across the land? That’s a lot to ask.

But again, advertisers were bolting from “Imus in the Morning.” Under those circumstances, the choice was easy and Trump-like: “You’re fired.” Commercial broadcasting is a business first.

CENSORSHIP
The nation’s leading media voices do a disservice to the word “censorship” when they bring it up in the Imus case. In nations around the world, journalists are disappearing in pursuit of government accountability. Laws repress and control the media in many parts of the planet. But here in the good old U.S. of A., you can pretty much watch, listen to or read anything material you want.

A corporate slap on the wrist, or even a firing from a multi-million dollar glamour job does not come close to censorship.

THE RETURN OF IMUS
No one is shedding any tears for Don Imus. He’s a shock jock with a legacy of racist, sexist, mean, stupid, outrageous quips, sketches, parodies, satire and rants. (He called PBS news anchor Gwen Ifill a “cleaning lady” when she joined the N.Y. Times. He called Washington Post media reporter Howard Kurtz a “beanie-wearing Jew boy.” On the occasion of Yasser Arafat’s funeral, he broad-brushed Palestinians as “animals.” Imus’ sports announcer called the U.S. women’s soccer team “juiced-up dykes.”) His 1974 comedy album on Bang Records: This Honky’s Nuts. 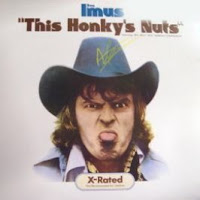 Media analysts say his interview style and audience attract top newsmakers from politics, media and entertainment. He’s raised millions for charity. Taken together, this is called “good radio.” He was paid a handsome $10 mil a year for his national syndicated radio show and cable TV simulcast.

And can we expect prominent African-American “leaders” to carry this banner and not rest until rappers, comedians and programmers clean up their act and find other words for women and African-Americans? I’m not holding my breath.

Look for Imus on satellite radio or cable TV after a nice two-month vacation.

Make no mistake: if He rose at all
it was His body
if the cells' dissolution did not reverse, the molecules
reknit, the amino acids rekindle,
the Church will fall.

The rest of the poem is posted at Christianity Today's men's devotional page.
(It's good all year.)
Posted by old school editor at 6:26 PM No comments: 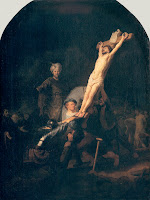 Ours is a paradoxical faith, celebrating life, but fully dependent upon a bloody, brutal death. Jesus Christ Himself taught, "Whoever wants to become great among you must be your servant, and whoever wants to be first must be your slave - just as the Son of Man did not come to be served, but to serve..."
Christianity's leader is renown as a man of peace, yet he is expected to return as a conquering king, a roaring lion. Paradoxes.
The symbol of this ancient faith is the execution stake. The method and means of this tortous, state-sponsored oppression was a slow, agonizingly painful demise. It is from this Roman practice we get the term "excruciating."
The show trial of Jesus Christ is the stuff of legal legend. I want to discuss a different trial, yours.
Imagine you're in a courtroom, just found guilty of the terrible, capital crime. It's a good verdict. You did the deed. You got caught. The evidence was clear and legally obtained. No loophole can get you out of the decision. The judge is about to pronounce the sentence upon you, and from the back of the courtroom, a famous man, known as the most virtuous in the community rises and says, "your honor, I wish to take the punishment for this man's crime."
The gallery erupts in gasps and shouts. Bedlam ensues. The judge has to hammer his gavel and shout, "Order in the court" to be heard. Things settle down and the judge calls the good, innocent man forward.
"You understand that this man is guilty of a capital crime? The punishment is death. The community cannot abide such crimes in our midst. Do you still offer to stand for him?"
"Yes, your honor. Yes, your honor," said the stand in.
"The law allows it. The sentence is death. This court is satisfied." In this hypothetical system, there is no automatic appeal. There are no delays. In a few hours the sentence was carried out, and you're a free man.
If justice has been served, what, then, do you owe the good citizen who took your punishment?
When I survey the wondrous cross
On which the Prince of glory died
My richest gain I count but loss
And pour contempt on all my pride.
(Isaac Watts, 1707)
Christianity offers life, thanks to the death of one Man.
(P.S. It's Friday, but Sunday's coming...)