Political marriages - for better or worse

Just for the record, a couple of quick thoughts on political marriages.

John Edwards’ late-coming admission of his affair shocks the political soul, again. (But nothing really compares to the former president’s dalliance.) It’s not just “boys will be boys.” Edwards was a big-time political leader who earned millions of votes in various national primary races. He was a major voice for class envy, class warfare even, and some people were listening.

Even though he talked it through with his family years ago, the public revelation opens the wounds afresh. And there’s still the open paternity question. (My goodness, that child deserves to know who her father is.)

No matter what the apologists say, the marriage vow still carries weight – and the breaking of that vow kills credibility with the public. Lying outright to gaggles of reporters at a time, well that can’t be good for one’s political future, can it? 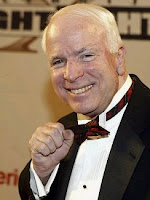 John McCain, asked by pastor Rick Warren at Saturday’s Saddleback Civic Forum about his worst moral failure, said it was the failure of his first marriage. After “extramarital affairs,” he divorced, then remarried, and eventually regained good relationships with his first wife and their children.

Political marriages are unique and difficult for their own reasons: the unrelenting visibility, the pressure on the kids, all those parties. Maybe, like Oklahoma Congressman J.C. Watts, some of these guys should retire “to spend more time with their families.”

All the more reason to “pray for those in authority.”
Posted by old school editor at 9:05 PM No comments:

Just a quick shout out to the McCullough family on the untimely passing of "Bernie Mac," a favorite of The Old School editor.
His Fox TV show was an oasis of common sense, playing the father figure for his sister's children while she was in rehab. Funny right where I live. He went mainstream with his role in the "Ocean's Eleven" franchise, and I loved "Mr. 3000."
He was an Original King of Comedy, a husband, father and grandfather. Gone too soon. Love ya man.
Posted by old school editor at 9:02 AM No comments:

I do not happily anticipate the decline of Western civilization, nor the decrease of American greatness, nor of it’s influence in the world. Nevertheless, the world is getting smaller. We’ve got some serious cultural issues facing us here in the U.S. of A. And all the while, the developing world is still developing.

Years ago, in casual conversation, I forecast that the 21st century would be “The African Century.” Finally, after centuries of exploitation, conquest and colonialism, and a full century of pursuing independence and nationhood, I thought that the land of my forefathers and foremothers would come into its own.

Rich in natural resources, exploding in Christianity, and with an ambitious people, I hoped to live to see the day that “the dark continent” would no longer be shrouded in illiteracy and poverty. The plague of apartheid was cured in southern Africa. Things were looking up.

But in the late 1990s, the AIDS pandemic took hold. And fratricide, one of hell’s most evil devices, sought to devour Rwanda, Burundi, Congo, Liberia, Sierra Leone, Uganda… (I’m running out of space, and tears). Centuries of civil war in the Sudan are now summed up in one word, Darfur. Africa has issues.

Africa’s issues are not insurmountable, but they will drag her ascendancy, while another giant takes its place on the world stage. Yes. It’s China, leader of developing nations.

I was impressed by a trip to Hong Kong in 2005. Along the way from the airport to my hotel, we passed miles and miles (and miles and miles) of shipping containers. And remember that Hong Kong is just one of China’s commercial gateways. China is a manufacturing, economic giant.

The 2008 Olympic Games were awarded to Beijing in 2001, thus the official launch of China as a world leader. Struggling with pollution, Tibet, Taiwan, human rights, religious repression, and a billion more issues befitting a nation its size, is China ready for its close-up?
Posted by old school editor at 8:51 PM No comments: